By Janet Hefler of the Martha’s Vineyard Times:

Last week veteran Jared Meader of Vineyard Haven experienced [the] “band of brothers” bond first-hand when fellow veterans Tom Rancich and Elliott Adler stepped up with a $5,000 loan to stop foreclosure proceedings on his home….

Mr. Meader shared his frustration and despair about possibly losing his home at a recent veterans’ support group meeting run by Tom Bennett, the associate executive director and senior clinical advisor at the Island Counseling Center.

Afterwards, Mr. Rancich pulled Mr. Meader aside and said he would talk to his business partner about helping the Meaders out.

“Tom said, hey, this isn’t charity; we all hit hard times, and I’m not going to see another veteran lose his house,” Mr. Meader recalled.

Mr. Rancich is a U.S. Navy veteran who spent part of his career as a SEAL dealing with disposal of unexploded bombs. He and his business partner Elliott Adler met in the Navy as classmates in explosive ordnance school.

After retirement from their military careers, Mr. Rancich and Mr. Adler started their own company, VRHabilis, in 2007. The “VR” stands for “veteran run,” and “habilis” is Latin for “work.”

Mr. Rancich said after he left the veterans’ support group meeting, he shared Mr. Meader’s story with his partner.

“I went to Jared and told him, we’re not a mega-corporation, but we’ll be damned if we’ll see you and your wife and kids put on the street for $5,000,” Mr. Rancich said. “And what we’d like to do is extend to you a loan for that amount, get you current, get the bank off your back and allow you to have a little breathing room, so you can have a chance to succeed.”

On May 5 he put a cashier’s check for $5,000 in Mr. Meader’s hands. The next day Mr. Meader paid his back mortgage payments to Bank of America and put a halt to foreclosure proceedings scheduled for May 18.

“I think that if I had not known Jared through Tom’s group, that would have been an impossible offer to make,” Mr. Rancich said. “But since we’ve sat there and cried at the table together, I was able to make the offer, and he was able to accept it in the vein that I was extending it, which was look, you’re a brother in arms, and one of our company’s core values is to try to help out disabled veterans.”

Mr. Meader and Mr. Rancich stopped by The Times office last week to share their story. Mr. Meader said he didn’t mind going public with it, in the hope that it would bring to light the problems that some returning veterans face, especially those with disabilities.

“One of my soap box issues, and this is repeated throughout our history, is the country is perfectly willing to go to war without an appropriate safety net for the guys coming back,” Mr. Rancich said. “And you just see an enormous divorce rate, an enormous alcoholism rate, and an enormous suicide rate because civilians are of the opinion that you have to have fought in the Battle of the Bulge or something like that to have post-traumatic stress.”

VRHabilis provides military range management, remediation, and emergency response. The company is currently under contract to help the U.S. Army Corps of Engineers in its survey and cleanup of World War II-era munitions from former practice sites along Martha’s Vineyard’s south shore.

Mr. Rancich and Mr. Adler share a kinship with disabled vets, since both of them qualified for that category from injuries during their years of service.

Mr. Rancich broke his neck and back in a helicopter crash in 1997. He said that because of superior care he received from therapists on the SEAL team, he was able to continue to serve out his 20 years.

“So one of our company’s goals is to take guys with traumatic brain injuries or missing limbs and use adaptive technologies or adaptive strategies to employ them in fields that they want to work,” Mr. Rancich said. 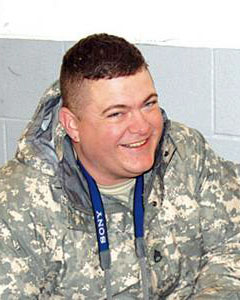