David Abel of The Boston Globe reports that storm-wrought changes in the currents at Martha’s Vineyard have exposed remnants of a bombing range the Navy operated there during World War II. Over the past year, dozens of rockets and larger munitions have washed ashore, including three live 100-pound bombs.

In April, the Corps of Engineers hired VRHabilis to find and safely dispose of these warheads. Their expertise in Explosive Ordnance Disposal (EOD) makes VRHabilis especially qualified for this job.

According to the Globe:

Over the past few months … [VRHabilis divers] have found 124 MK-23 bombs, five MK-5 bombs, and nearly 2,000 pounds of other bomb parts off Cape Poge. Along South Beach, where the work continues, they have found about 115 similar bombs, many of them designed to destroy submarines. None of those weapons, nearly all covered in rust and barnacles, contained explosives or rocket propellant or posed any danger, aside from cuts to unsuspecting swimmers.

But the threat of an explosion is always there, making the work painstaking and tedious. The divers use waterproof magnetometers to detect metal buried in the ocean floor, and when they find it, they use a special pump to remove the surrounding sand.

Before they handle the bombs, they inspect them carefully, relying on a video feed to a trailer on the beach, where colleagues check to see whether the weapons have experienced high-speed flight or signs of impact. The divers do not touch the bombs until all agree that the old weapons appear inert.

“We don’t take any chances,” said Tom Rancich, chief executive of VRHabilis Co., the diving company doing the work. “They’re not moved until we’re sure.”

For more information about the project, including a map showing the area being searched, read the Globe article, “Into the booming surf.” 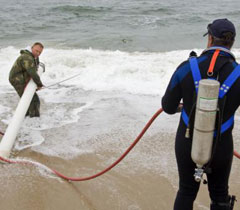