Nelson Sigelman of the Martha’s Vineyard Times published a story on July 2, Navy vets put war-making training to peaceful use, which features some of the US Navy veterans of VRHabilis. Here are some excerpts:

The popular stretch of sand and surf that fronts on the Atlantic Ocean is far removed from the world’s conflicts that shaped much of his training, but for Eliott Adler, co-owner of VRHabilis, the cleanup is an opportunity for veterans, some of whom are disabled, to do meaningful work.

This spring the U.S. Army Corps of Engineers hired EOD Technologies (EODT), a Tennessee based company that specializes in munitions cleanups, to find and remove practice munitions in Katama and Cape Poge on Chappaquiddick…. While the Cape Poge cleanup was primarily land based, the South Beach cleanup contract … called for a search and cleanup 110 feet out from the shoreline.

EODT subcontracted the South Beach dive work to VRHabilis, a company with a strong local connection. West Tisbury resident Tom Rancich, a former Navy SEAL, is a partner in the company and once commanded a specialized unit that included Mr. Adler.

Since April the men and their four employees have worked out of a small trailer parked on the beach. They have methodically moved along the shore searching the underwater terrain for any lost munitions.

Safety, for the public and the crew, has been a primary concern. While one diver is in the water another is suited up and ready to assist at all times. Signs warn the public that they are not allowed within a set exclusion zone.

The search technique relies on a diver who searches a specific grid with a magnetometer, an instrument that detects metal objects buried in the sand. When a signal is heard the diver uses an air vacuum to remove sand around the object.

If the object turns out to be old munitions it is not moved until at least two of the on-site ordinance experts agree that it appears to be inert. “The more eyes that you can put on it the better and when everybody has a consensus that it is acceptable to move that is when we make the decision to bring it up,” said Mr. Adler.

The use of video technology to involve other experts is one of the techniques that VRHabilis pioneered.

During a recent demonstration visit to the work site arranged by the Army Corps of Engineers, diver Erik Toews entered the rolling surf tethered to the shore by a rope, air hose, and communication cable. While in the water he communicated with Kim Heckhausen of Taunton, a retired Navy deep-sea diver who now works as a commercial diver in Boston. Mr. Heckhausen monitored the diver’s progress from within the trailer by means of a video camera mounted on Mr. Toews’s hardhat.

Standby diver Robert Rozzi of Hull, who served in the same Navy unit as Mr. Adler and Mr. Rancich but on another team, remained suited up and ready to assist. When it came time to leave the water diver Larry Weinmann, of Vero Beach Florida, assisted Mr. Towes with the heavy cables.

As of June 12 the team had found a total of 103 ordinance items, including old warheads and rocket motors, none of which contained high explosives according to the Army Corp of Engineers.

The South Beach cleanup was scheduled to conclude today, but extended to July 7 and may be extended beyond that date.

In a telephone interview Monday Mr. Adler, who calls Knoxville Tennessee home, said that after he retired from the military in 1996 he went to work for companies in the environmental and unexploded ordinance fields.

When he saw a niche that called for a combination of diving and ordinance expertise, he contacted Mr. Rancich and together they started VRHabilis. “Tom and I have been friends for about 20 years,” Mr. Adler said.

Mr. Adler said the Navy created their team for a specific mission in the first Gulf war after it was learned that the beaches of Kuwait were heavily mined. Their job was to work with special operations units.

“One of the alternate battle plans called for landing personnel on the beaches of Kuwait,” Mr. Adler said, “so they needed our unique skill set to be able to go in and defuse the mines and remove booby traps and things like that, so that other personnel could get in safely.”

Today Mr. Adler and Mr. Rancich use their skills to clean up former military ranges. Their business strategy includes selling the recovered metal as scrap, a process that helps defray costs and utilizing readily available remote control devices where possible.

“One of the things that we are particularly proud of is that we offer employment opportunities for guys that have become disabled during the course of their military service,” Mr. Adler said. He said the company uses adaptive technology so that disabled veterans can work in their chosen field. For example, a bulldozer can be fitted out so that someone who cannot walk can operate the machine, or operate a remote control device.

Mr. Adler said the veterans he has worked with represent a significant investment by the military in training, have a tremendous amount of experience and bring a good work ethic and extensive leadership skills. Mr. Adler said, “So you are able to get a top flight, A-1 individual who has had success in the same career field and we are able to utilize those talents.”

For more information, including additional photographs, a video clip, and links to PDF maps, read the entire article: Navy vets put warmaking training to peaceful use on the Martha’s Vineyard Times website. 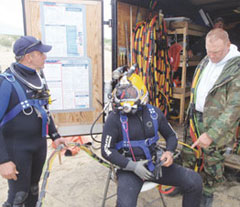